MONTREAL, September 9, 2020. Tarku Resources Ltd (TSX-V: TKU) (the “Company” or “Tarku”) announces it has increased its land position along the regional Sunday Lake fault and will begin fieldwork to prepare for a drilling campaign on its wholly owned Three A’s Projects, in the Matagami area, Eeyou Istchee James Bay, Quebec.

Following the field work and the compilation of historical data carried out over the past 3 years on the Admiral and the Apollo Project, the Company reaffirms the strong gold mineralization similarities with the geological context found at the Detour Lake Mine and the Kirkland Lake Mining Camp. On the Admiral project, Tarku has added 50 claims along the regional fault and on Apollo, the Company is preparing field work over the 6 km zone defined along the same regional fault locally named Rivière Waswanipi shear zone (see figure 1).

Julien Davy, President and CEO of Tarku, stated: " The preparation of a drilling campaign is existing. Several geological evidences lead us to believe that the extension of the Sunday Lake Fault on our 3A projects and more specifically on the Apollo project, could contain the source of the gold we found in our till samples. This is where we will target our drilling during next winter. Along with the new claims added, we now control almost 40km along a high prospective Gold-bearing regional fault.”

About the Apollo project

The Admiral project is part of the “Three A’s”, 3 projects wholly owned by Tarku in the Matagami area (Admiral, Apollo and Atlas) totaling 248 mining titles centered on the Eastern extension of the Sunday Lake regional fault including ductile shear of the Waswanipi River (RWSZ). Apollo is adjacent to the north of its also 100% owned Atlas Project. It consists of 97 claims (50,6 km2) centred on the Rivière Waswanipi ductile shear zone. This regional structure is characterized by the presence of alkaline rocks, polygenic conglomerates (Timiskaming type) and porphyry intrusions bearing anomalous gold values on the order of hundreds of parts per billion (GM 52712). This corridor, altered to carbonate-hematite-magnetite, contains the Rivière Waswanipi gold showing (2.36 g/t Au over 1 m; GM 51193) hosted in a porphyritic dyke and tuffs altered to pyrite-fuchsite as well as several porphyry intrusions bearing anomalous gold values on the order of 0.1 to 0.9 g/t Au over 0.6 to 5 m (GM 52712).

Tarku is now planning a ground geophysics program to prepare for its next winter drilling campaign.

About the Admiral project

The Admiral project is part of the “Three A’s”, 3 projects wholly owned by Tarku in the Matagami area (Admiral, Apollo and Atlas) totaling 248 mining titles centered on the Eastern extension of the Sunday Lake regional fault including ductile shear of the Waswanipi River (RWSZ), a favourable setting for orogenic gold mineralization associated with alkaline rocks and porphyry intrusions. Tarku interprets this geological context as being similar to the Sunday Lake regional fault, host of the Detour Lake Mine or the Kirkland Lake Mining Camp.

Tarku’s management believes that the gold potential of the Matagami sector has been undervalued and uses today modern geological models and exploration techniques to aid in the discovery of gold mineralization. Tarku cautions that the mineralization at the Detour Lake mine or the Kirkland Lake mining Camp may not be indicative of the mineralization that may be identified on the Company’s Matagami projects and is used as a conceptual exploration model only.

Julien Davy, P.Geo., M.Sc, MBA, President and Chief Executive Officer of Tarku, is the qualified person under National Instrument 43-101 Standards of Disclosure for Mineral Projects who prepared, supervised and approved the technical information in this news release.

Tarku is an exploration company focused on the “Three A’s” exploration projects, (Apollo, Admiral and Atlas Projects), in the Matagami greenstone belt, which has been interpreted by management as the eastern extension of the Detour Belt in Quebec, and which has seen recent exploration successes by Midland Exploration Inc., Wallbridge Mining Company Ltd., Probe Metals Inc.

Project generation is the foundation of creation wealth in the mining business. Tarku is interested in generating sustainable projects by conducting exploration in areas with strong geologic potential and high levels of social acceptability within Québec, and projects that can be explored and developed quickly with the support of the community. Tarku has 28,074,036 outstanding shares, of which approximately 75% are owned by 20 insiders and major shareholders. Management is also actively reviewing several opportunities and projects to build up the Company portfolio and generate shareholder value. 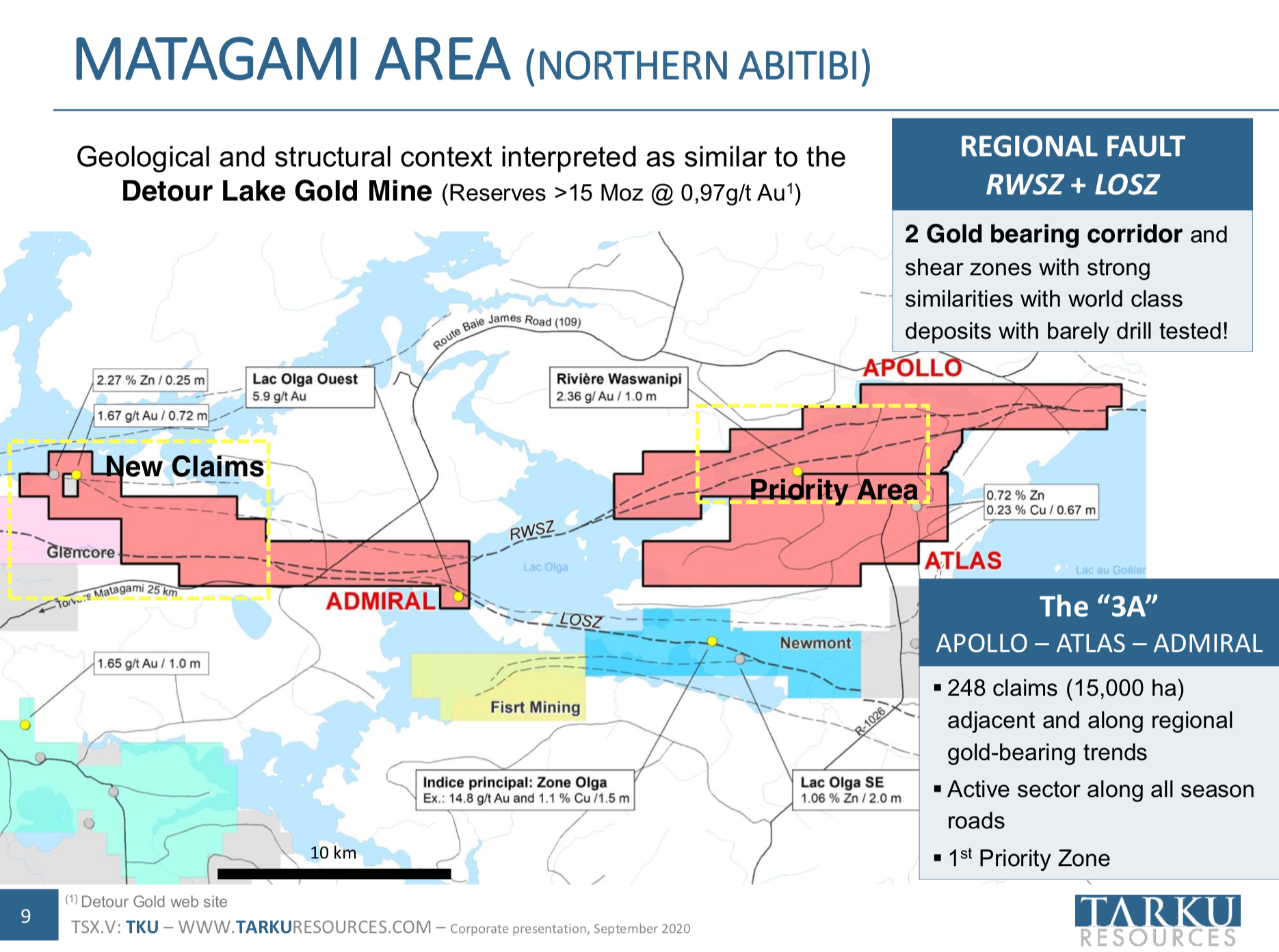