MONTREAL, October 05, 2020. Tarku Resources Ltd (TSX-V: TKU) (the “Company” or “Tarku”) is pleased to announce that it has entered into an agreement with arm’s length parties (the “Vendors”) under which Tarku intends to acquire up to 75% in 1250 hectares of mineral claims in the Tombstone area mining District, Arizona. The agreement is subject to completion of due diligence, the finalization of a definitive agreement governing the acquisition and receipt of all necessary regulatory approvals, including the approval of the TSX Venture Exchange (the “Exchange”).

Julien Davy, President and CEO of Tarku, stated: ” Tombstone has an incredible history of mining. The area has produced approximately 32 million ounces of silver at an average grade of almost 26 oz/t as well as 260,000 ounces of gold at 6.5g/t and in lesser amounts other base metals as lead, zinc, copper, zinc and manganese. Previously thought to be an epithermal silver-lead-zinc district of limited size and potential, we now understand that mineralization is associated with volcanism and related caldera formation, and alteration assemblages which are characteristic of porphyry copper deposits and its surrounding systems. It’s not surprising to find world class Cu-Au porphyry producing mines to the south within the same geological trend.”

“Tarku’s Project consists of the amalgamation of an exceptional land package in the Tombstone District. We believe the decades of silver production mainly from 0 to 200m deep due to their technical capacity of pumping water in the 30’s, is the tip of the iceberg of a bigger Cu-Au porphyry system. The area has never been explored in modern times with a “big picture” view and utilizing a thorough systematic approach.

History of the Tombstone Area

The Project is located in  Cochise County, Arizona in the famous Tombstone Mining district, one of the earliest silver mining areas in western United States that start producing numerous silver mines in 1877. Despite the attractive quantity of silver found in the district, the low metal prices of the 1915’s led past producers to focus mainly  on high-grade veins. During the 38 year-period from 1877 to 1915, when most of the ore was produced at Tombstone, declining silver prices, financial panic, and the removal of the United States currency from the silver standard, had immeasurably more effect on the mines than the Earp/Clanton feud, bandits, and their technical inability to deal with underground waters.

Some sporadic production in the area was recorded at different periods also stimulated by a higher gold price. During World War II, there was some study of the manganese deposits in the district in relation to the war effort. Exploration work in late 1950 showed values in lead and zinc and in 1965, limited drilling was completed probing for porphyry-copper-type model recovering alteration zones in the vicinity of breccia pipes and extensive but low-grade mineralization.

Between 1980 and 1985, Tombstone Exploration, Inc. operated an open pit mine on the Contention vein and produced up to 3,000 tons per day of ore averaging in the range of 1.25 oz/t Ag and 0.6 g/t Au. No exploration drilling was ever done, and no ore reserves of significance were measured ahead of mining.

The Project encompasses a total of about 1,250 hectares (13 km2) adjacent to the South of the Tombstone city, Cochise county, Arizona and consists of a combination of BLM claims as well as patented and unpatented claims (see figure 1).

The area is characterized by mountain building episodes and sedimentation (mountain erosion) intruded by numerous granites. Older rocks are unconformably overlying the Tombstones hills by tick sequences of sediments which are excellent host mineralization as they chemical and resistant characteristics make them break easily under tectonics stress and provide pathways for veins and mineralization. The principal production from the Tombstone mining district has been from high grade veins associated with those fractures.

Although Tombstone has primarily been a silver camp, substantial gold and lead, and subordinate copper, zinc, and manganese have also been produced. The silver to gold ratio for documented production between 1877 and 1937 is 126 to 1 and production has come mainly from mineralized vein fractures cutting folded sediments. Ninety-five percent or more of the production is from the surface to 200 m and is primarily from oxide ore minerals.

More recent publications and data compilation concluded that the volcanic geology and structure in the Tombstone area is related to a district-scale Laramide caldera. Mineralization in the district is also related to the caldera and attendant hydrothermal fluid migration. These districts are typically zoned from silver-rich peripheries to higher base-metal and gold contents near to the intrusions. Copper-gold mineralization occurs in intrusion-hosted stockworks or skams.

In the early 70’s, the American Smelting & Refining Company (ASARCO) obtained a lease on the Horne claims around the Robbers’ Roost breccia pipe. They drilled three holes to a maximum depth of 1700m (5,000 ft) on a porphyry copper alteration zone in the vicinity of the breccia pipes. These holes intersected extensive but low-grade mineralization, grading vertically downward from a lead-zinc phase of mineralization into porphyry copper type mineralization, including disseminated pyrite, chalcopyrite, and molybdenite, as well as secondary K-feldspar and purple anhydrite. Poor copper prices at the time and since have discouraged further exploration for copper at this depth.

These mining claims are part of the agreement and such data strongly encourage Tarku’s management to believe the Tombstone Area has the potential to host a significant porphyry copper system with associated gold and silver.

Summary of the Transaction

Tarku has the right but not the obligation to earn up to a 75% interest over 3 years in the Vendors’ mineral claim by funding project expenditures of up to US$3 million as follows:

At the end of this Earn-in Period, the Vendors and Tarku will become JV partners on the Property, 75% Tarku, 25% the Vendors. Should the Vendors elect to dispose of their remaining interest, Tarku will keep a Right of First Refusal.

Upon completion of the Definitive Agreement, Tarku will issue 3,000,000 common shares to the Vendors in consideration for the Projects. The shares will be subject to resale restrictions of 4 equal period of 6 month each and a RoFR will allow Tarku the opportunity to place these shares with existent shareholders at prevailing market price. At each anniversary date over the 3 years, Tarku will pay US$ 175,000 to the vendors of which a minimum of US$ 50,000 will be a cash payment and US$ 125,000 will be paid either in shares or in cash at the Companies discretion. In addition, Tarku will have to make several payments of a total of US$ 725,000 spread over the next 2 years to purchase specific options the Vendor has on certain patented and unpatented claims.

Completion of the Transaction is subject to a number of conditions, including but not limited to the following key conditions:

Julien Davy, P.Geo., M.Sc, MBA, President and Chief Executive Officer of Tarku, is the qualified person under National Instrument 43-101 Standards of Disclosure for Mineral Projects who prepared, supervised and approved the technical information in this news release.

Tarku is an exploration company focused on making new discoveries. Tarku owns 100% on the “Three A’s” exploration projects, (Apollo, Admiral and Atlas Projects), in the Matagami greenstone belt, which has been interpreted by management as the eastern extension of the Detour Belt in Quebec, and which has seen recent exploration successes by Midland Exploration Inc., Wallbridge Mining Company Ltd., Probe Metals Inc.

Project generation is the foundation of creation wealth in the mining business. Tarku is interested in generating sustainable projects by conducting exploration in areas with strong geologic potential and high levels of social acceptability within Québec, and projects that can be explored and developed quickly with the support of the community. Tarku has 28,074,036 outstanding shares, of which approximately 75% are owned by 20 insiders and major shareholders. Management is also actively reviewing several opportunities and projects to build up the Company portfolio and generate shareholder value. 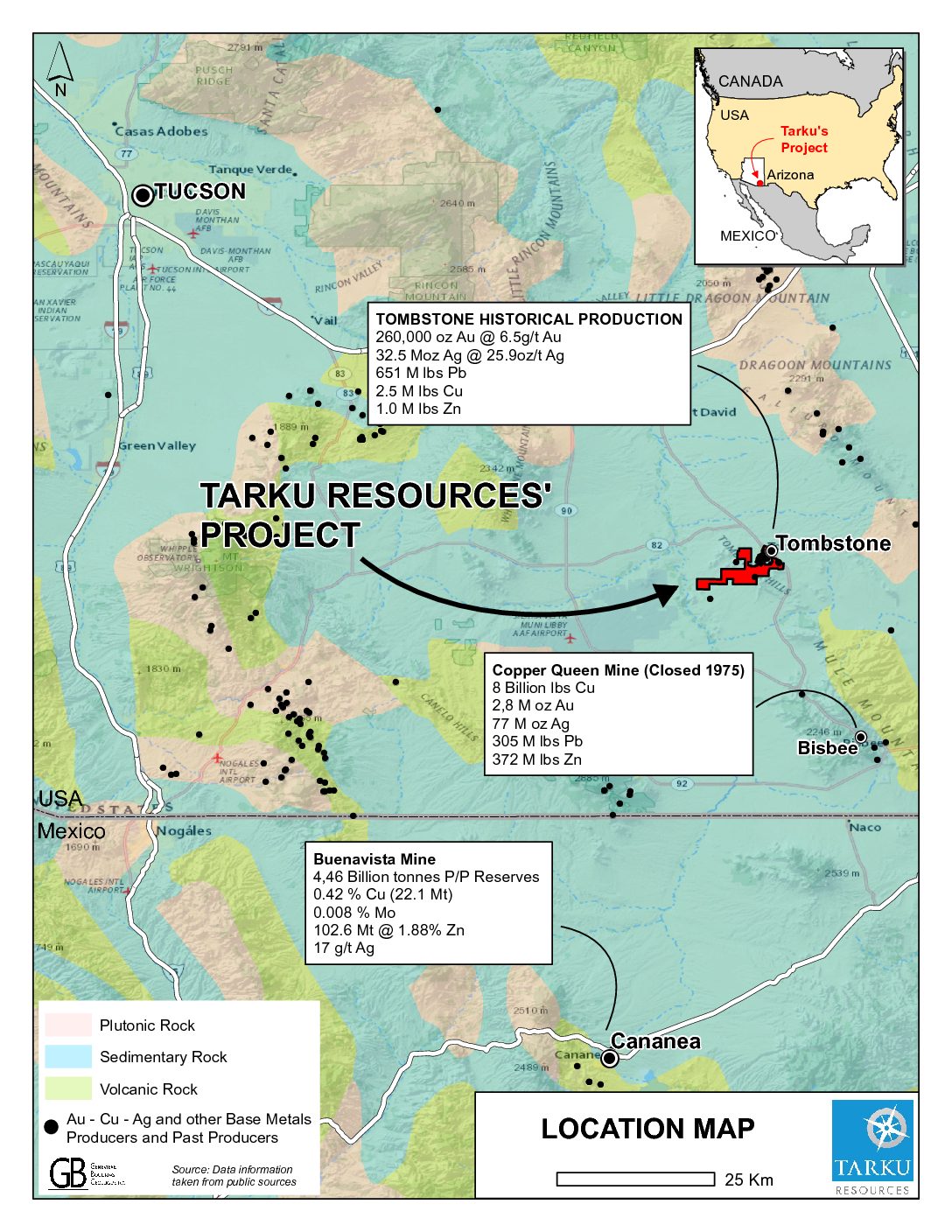