MONTREAL, February 3rd, 2021. Tarku Resources Ltd (TSX-V: TKU) (the “Company” or “Tarku”) is pleased to announce the reception of several grab samples taken during a field visit grading up to 2,030 g/t (62,27 oz/t) Silver and the imminent launch of a 3,000 meters (10,000 ft) drill program on its Silver Strike project in the Historical Silver district of Tombstone Arizona (see figure 1).

*Rock grab samples are selective by nature and may not represent the true grade or style of mineralization across the property.

Tarku has received today 4 of a total of 8 samples taken during a field visit done during December 2020. Best results returned 2,030 g/t Ag in an outcropping N015° trending mineralized vein system at Ground Hog. Other significant results returned 45 g/t Ag at the Solstice past mine and 35 g/t Ag at Ace in the Hole past mine. Remaining samples are expected to be received at the end of February 2021.

Julien Davy, President and CEO of Tarku, stated: "These first results including the 2,030 g/t Silver at Ground Hog demonstrate that high-grade silver mineralisation is recoverable along the targeted NNE regional structure as far as 4 km away from the historical high-grade Tombstone area where we also control patented claims”.

“The mines that produced in the early 1900 in the vicinity of the Tombstone city demonstrated impressive silver recoveries at a historical silver price as low as 1$/oz. Mining was conducted manually on high-grade veins until a maximum of 200 m of depth. Tarku intents to prove that this geological high-grade environment at today’s silver price could be more profitable by demonstrating that those veins both extends further at depth and also along regional faults on several km.”

Tarku is pleased to announce the initiation a 3,000 m (10,000 ft) reverse circulation drill program with Major Drilling. The program will test various more advanced to early-stage targets: the initial targets to be tested will include the Lucky Cuss, the Luck Sure, the Telephone and the Bunker Hill past mines which have produced high-grade silver and have been explored only to a maximum depth of 200 m. Today’s interpretations suggest that those mines have sub-vertical high-grade silver mineralisation ore-shoots that are extending at depth and that could repeat themselves along regional structure on their lateral extensions. The second part of the program will target area further to the South West along regional NNE and EW fault systems as the Prompter and the Rattlesnake Faults (see figure 1). Targeted area will encompass area as the Ground hog, the Sunset, the Ace in the Hole and the Solstice area. Drilling is scheduled to start during the last week of February 2021 and should last until April 2021. This program will allow our geological team to further expend its knowledge of the area.

IMPORTANTLY, the above projected exploration activities are subject to Covid-19 restrictions in Arizona. While the Company's recent work programs have been relatively unimpeded, there is a risk that tighter restrictions may impact the Company's ability to conduct fieldwork.

Tarku believes that the silver mineralisation at the Silver Strike Project is strongly related to tectonic features. Deeper understanding of structural criteria of the area will help to explain the known silver occurrences and to identify the presence of potentially larger ore silver-rich deposits.

Tarku’s Silver Strike Project is located in Cochise County, Arizona in the famous Tombstone Mining district, one of the earliest silver mining areas in western United States that start producing numerous silver mines in 1877. Despite the attractive quantity of silver found in the district, the low metal prices of the 1915’s led past producers to focus mainly on high-grade veins. During the 38 year-period from 1877 to 1915, when most of the ore was produced at Tombstone, declining silver prices, financial panic, and the removal of the United States currency from the silver standard, had immeasurably more effect on the mines than the Earp/Clanton feud, bandits, and their technical inability to deal with underground waters. The area has produced approximately 32 million ounces of silver at an average grade of almost 26 oz/t as well as 260,000 ounces of gold at 6.5g/t and in lesser amounts other base metals as lead, zinc, copper, zinc and manganese.

Some sporadic production in the area was recorded at different periods also stimulated by a higher gold price. During World War II, there was some study of the manganese deposits in the district in relation to the war effort. Exploration work in late 1950 showed values in lead and zinc and in 1965, limited drilling was completed probing for porphyry-copper-type model recovering alteration zones in the vicinity of breccia pipes and extensive but low-grade mineralization.

Between 1980 and 1985, Tombstone Exploration, Inc. operated an open pit mine on the Contention vein and produced up to 3,000 tons per day of ore averaging in the range of 1.25 oz/t Ag and 0.6 g/t Au. No exploration drilling was ever done, and no ore reserves of significance were measured ahead of mining.

Such data, as well as Tarku’ sampling results of up to 2,030 g/t Silver on grab samples in the Ground Hog area strongly encourage Tarku’s management to believe the Tombstone area has the potential to host a significant deposits as epithermal silver-rich vein deposit and porphyry copper system with associated gold and silver.

Julien Davy, P.Geo., M.Sc, MBA, President and Chief Executive Officer of Tarku, is the qualified person under National Instrument 43-101 Standards of Disclosure for Mineral Projects who prepared, supervised and approved the technical information in this news release. All samples selected within the exploration program are subject to a company standard of internal quality control and quality assurance programs which include the insertion of certified reference materials, blank materials and duplicates analysis. All rock samples were sent to ALS Global laboratories located in Tucson, Arizona where they are processed for Gold, Silver and 51 other chemical elements analysis by 30 g. fire assay with finish by a combination of atomic absorption and gravimetric methods. Additionally, analysis by screen metallic processes is performed on select samples. ALS Global quality systems conform to requirements of ISO/IEC Standard 17025 guidelines and meets assay requirements outlined for NI 43-101.

Tarku is an exploration company focused on making new discoveries in favourable mining jurisdictions as Quebec and Arizona. In Quebec, Tarku owns 100% on the “Three A’s” exploration projects, (Apollo, Admiral and Atlas Projects), in the Matagami greenstone belt, which has been interpreted by management as the eastern extension of the Detour Belt, and which has seen recent exploration successes by Midland Exploration Inc., Wallbridge Mining Company Ltd., Probe Metals Inc. In Arizona, in the Tombstone district, Tarku owns the option to acquire 75% on 20km2 in the Silver Strike project. 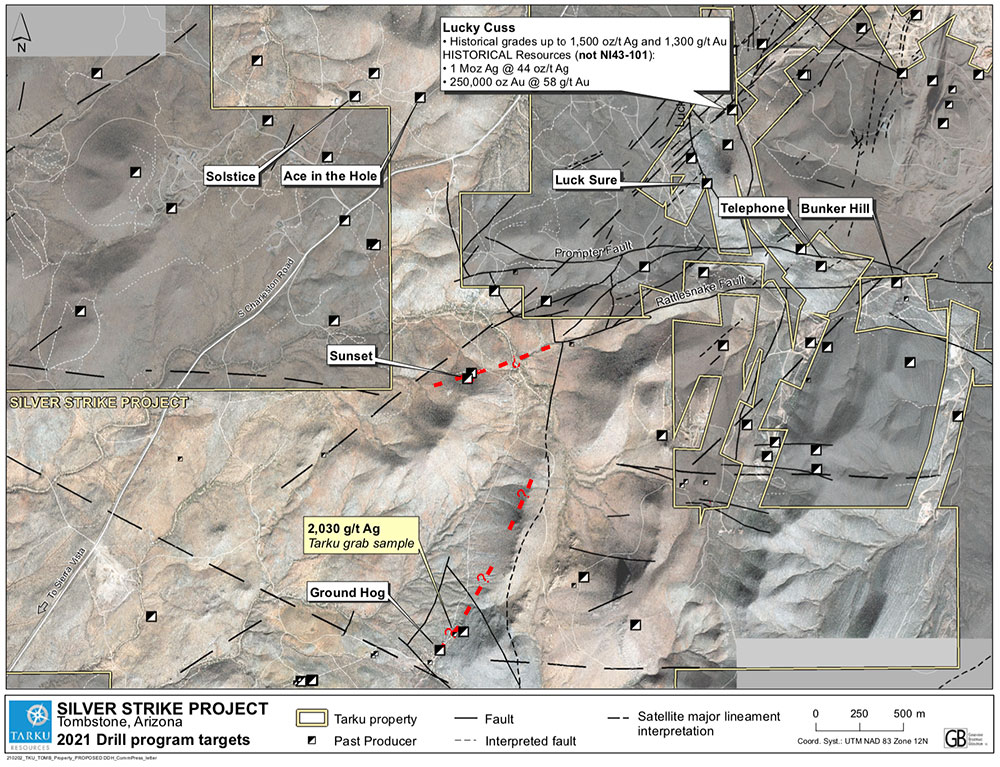