Tarku and SOQUEM intersect 16.7 g/t Au over 1 m in a new horizon on the Guercheville Project

SASKATOON, June 14, 2018. Tarku Resources Ltd (TSX-V: TKU) (the “Company” or “Tarku”) is pleased to announce the results of a 2,469-metre drilling program on the Guercheville Project in Québec that confirmed the potential of the Fenton Lake West surface showing. The polymetallic project is situated 50 kilometres southwest of Chapais in the Eeyou Istchee–James Bay Territory.

Julien Davy, President and CEO of Tarku, commented: “In addition to the known surface showings, the strong potential of the Guercheville Project has been demonstrated once again by the discovery of new mineralized intersections, such as 16.7 g/t Au over 1 metre, in a previously unknown horizon.” He added, “This horizon is roughly 60 metres north of the Fenton Lake West showing where 19.2 g/t Au was obtained, suggesting several mineralized horizons or structures may be present in this area, now drilled for the first time.”

The aim of the 11-hole program is to test the depth extensions of several gold and polymetallic surface showings and to investigate some of the geophysical anomalies identified by SOQUEM over the past few years (FIGURE 1). All targets were explained by the presence of sulphides as disseminations or stringers or by sulphide-bearing quartz veins and veinlets, almost all hosted in schistose and carbonatized basalts. These occurrences are similar to the mineralization observed in the adjacent Fenton deposit of SOQUEM and Cartier Resources where an intersection of 29.6 g/t Au over 2 m at a depth of 550 metres below the surface was recently announced, thereby doubling the known extension of their deposit (see news release of June 5, 2018; www.ressourcescartier.com) (Tarku cautions that the mineralization of the Fenton deposit may not be indicative of the mineralization that may be identified on the Guercheville Project).

Some slightly anomalous Au and Cu zones were also encountered in quartz diorite and anorthosite of the Rivière Opawica Complex in the same area as the Fenton Lake West showing (drill holes 1391-18-30 and 1391-18-31). The most significant results from the drilling program are presented in the table below:

* Intervals are expressed as downhole core lengths. True widths could not be determined using the information available. n/s: not significant.

Drilling was carried out by Forages Hébert, based in Amos (Québec), from January 29 to March 12, 2018. Eleven holes were drilled with azimuths ranging from N210 to N230 and dips from -45º to -55º. Hole depths ranged from 150 to 375 metres. A total of 1,012 samples were collected for 1,375 metres of sampled core, representing 56% of all drill core. The analyzed samples were sawed half-core samples of NQ diameter, with the other half saved for future reference. A total of 88 control samples consisting of standards and blanks were inserted in the sampling sequence, representing 9% of all samples analyzed. The core samples were sent to the laboratories of ALS Minerals in Val-d’Or (Québec) and Vancouver (British Columbia) for gold analysis by fire assay with atomic absorption finish (ALS code: Au-AA23). All samples were also analyzed for a suite of metals and trace elements by the four-acid digestion ICP-AES method (33 elements, ALS code: ME-ICP61). Twenty (20) samples were sent for complete analysis (code ALS: CCP-PKG01) by combining the ICP-AES and ICP-MS methods for major and trace elements (codes ALS: ME-ICP06 and ME-MS81).

The Guercheville Project comprises 80 claims (4,385.64 ha) held 100% by SOQUEM and is located approximately 50 kilometres southwest of the town of Chapais, accessible year-round by forestry roads. As announced in the press release release of January 18, 2018, Tarku has the option to acquire, under certain conditions, a 50% interest in the property. According to the terms of the agreement, SOQUEM will be the operator of the work program in the first year and Tarku will have the opportunity to become the operator starting the second year.

The project has the potential to contain gold and base metal (Cu-Zn) mineralization similar to the adjacent Fenton deposit held 50% by SOQUEM and 50% by Cartier Resources. Gold concentrations in the Fenton deposit have been correlated with the presence of sulphide minerals, silica, sericite, chlorite and carbonate alteration, and areas of chargeability anomalies and magnetic highs within sheared pillow basalts, all of which have been observed on the Guercheville Project.

SOQUEM, a subsidiary of Ressources Québec, is a leading player in mineral exploration in Québec. Its mission is to explore, discover and develop mineral resources in Québec. SOQUEM has participated in more than 350 exploration projects and contributed to major discoveries of gold, diamonds, lithium and many other minerals.

Tarku Resources Ltd is an exploration company focused on generating sustainable projects for precious and base metals by conducting exploration in areas with strong geologic potential and high levels of social acceptability. Tarku holds a 100% interest in all its projects and has an option to acquire a 50% interest in the SOQUEM project. Project generation is the foundation of mining development, and Tarku’s vision is to generate exploration projects with excellent potential for prospective partners or buyers. The Company has an experienced management team with a successful track record. The goal of Tarku is to provide value for its shareholders through the implementation of strategic property acquisition, innovative exploration techniques and exploration of fertile ground. Management cautions that there is no assurance that past results or discoveries on adjacent or nearby land packages are indicative that the Company will achieve similar results on its projects.

Benoit Lafrance, P.Geo., PhD, Exploration Manager and Director of Tarku, is the qualified person under National Instrument 43-101 Standards of Disclosure for Mineral Projects who prepared, supervised and approved the preparation of the technical information in this news release. 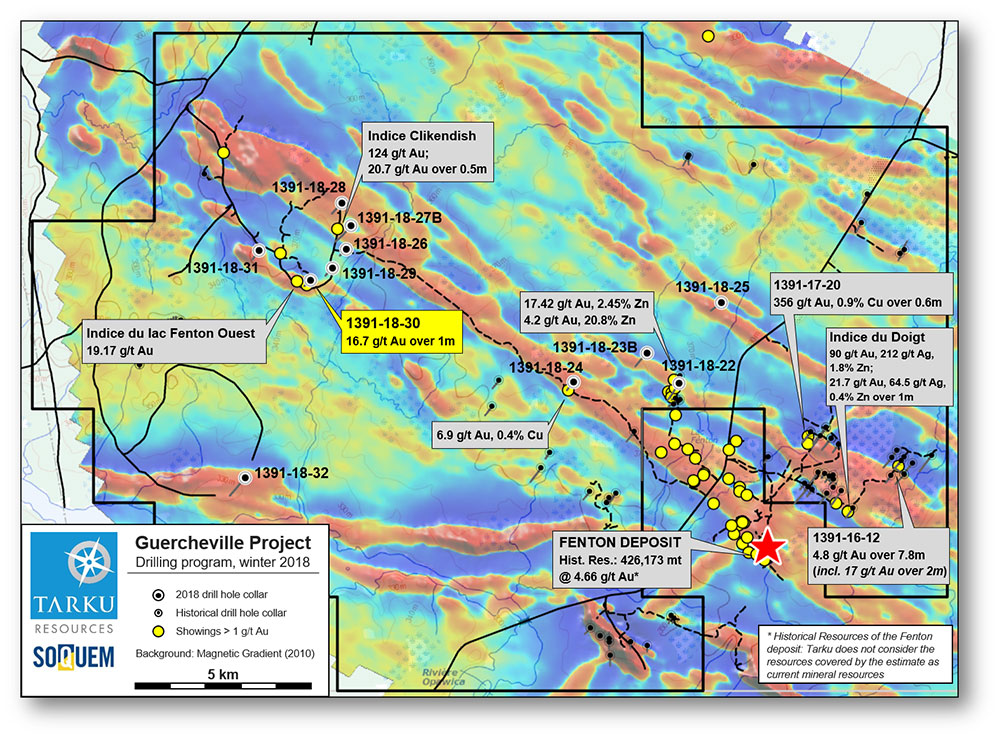