Highlights of the 2019 Magnetic Survey:

Julien Davy, President and CEO of Tarku, stated: "This magnetic survey strengthens our understanding of the source of the gold in the area. All historical drillholes were further to the South of the Rivière Waswanipi Shear Zone as the gold potential related to porphyritic and alkaline rocks similar to the Detour Mine and the location of that regional fault wasn’t understood as it is today. Tarku’s approach today is based on modern and proven models and the Mag survey results give us more confident in our model and opens door for new Gold targets related to intrusions on our Apollo projects”. 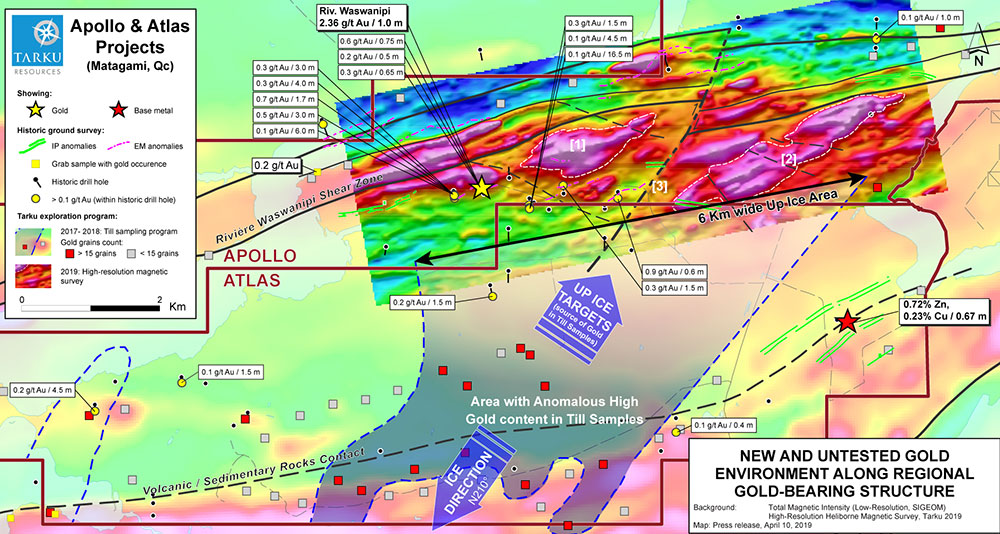 In January 2019, Tarku completed a 271 line-km high-resolution helicopter-borne magnetic survey over the main targeted areas of the Apollo and Atlas projects. Flight lines were surveyed at a 100-metre spacing and was conducted by Prospectair (Gatineau, Quebec) and Dynamic Discovery Geoscience (Ottawa, Ontario) to aid interpretations of the mineralized systems and identify new gold targets within the recently define 6 km wide favourable zone.

As previously described, Tarku’s 2017 till sampling program identified a 6 km wide favourable zone along the regional Rivière Waswanipi shear zone (RWSZ) that may be the source of the gold grains sampled (see press release dated February 28, 2018).

About the Apollo project

Tarku is an exploration company focused on generating sustainable projects for precious, base and strategic metals by conducting exploration in areas with strong geologic potential and high levels of social acceptability. Project generation is the foundation of mining development, and Tarku’s vision is to generate exploration projects with excellent potential for mining development for prospective partners or buyers. Tarku has 76,148,797 outstanding shares, of which approximately 70% are owned by insiders and major shareholders.

Benoit Lafrance, P.Geo., PhD, Exploration Manager and Director of Tarku, is the qualified person under National Instrument 43-101 Standards of Disclosure for Mineral Projects who prepared, supervised and approved the technical information in this news release.