Tarku’s Generates 5.35km of Targets for Drilling its 3As Projects, Quebec

MONTREAL, May 26, 2022. Tarku Resources Ltd (TSX-V: TKU – FRA: 7TK – OTCQB: TRKUF) (the “Company” or “Tarku”) is pleased to announce that nine high-priority targets, totalling 5.35km in length, have been generated ahead of the maiden drill program at the Apollo Gold Project, following the completion and interpretation of the deep-penetrating and high-resolution IP survey. Apollo is located in the Matagami area, Eeyou Istchee James Bay, Quebec.

Julien Davy, President and CEO of Tarku Resources said: “This is an exciting time for Tarku and our shareholders, the scale and number of the targets generated by this work program at the Apollo Project has surpassed all our expectations. We will now refine the proposed drill holes ahead of commencing a maiden drill programme at the 3As Projects.”

The 14.5-line km survey has been conducted by Simcoe Geoscience, using their Alpha IPTM system. Eight (8) lines were completed in 22 working days over the priority area of the Rivière Waswanipi Shear Zone, which Tarku interprets as being the east extension the regional Sunday Lake Fault, host of the Detour Lake Gold Mine or the Kirkland Lake Gold Mining Camp. The results of this Induced Polarization (IP) survey were combined with the existing IP and magnetic data to ensure the maximum amount of information could be used in the targeting process for our maiden drill program at the 3As Projects.

The resistivity data has defined a number of local structures and geological features, including a series of ENE-WSW dykes and NW-SE oriented faults. The chargeability data has defined nine areas of potential sulphide mineralization covering a total strike length of 5.35km, that appear to be associated with these the dykes and faults (Figure 1). These targets are near-surface, up to 400 meters below the surface (Figure 2).

Strong IP responses associated with high/moderate resistivity values. The responses in this group are interpreted to be consistent with gold mineralization within shear zones and porphyritic dykes bearing anomalous gold values 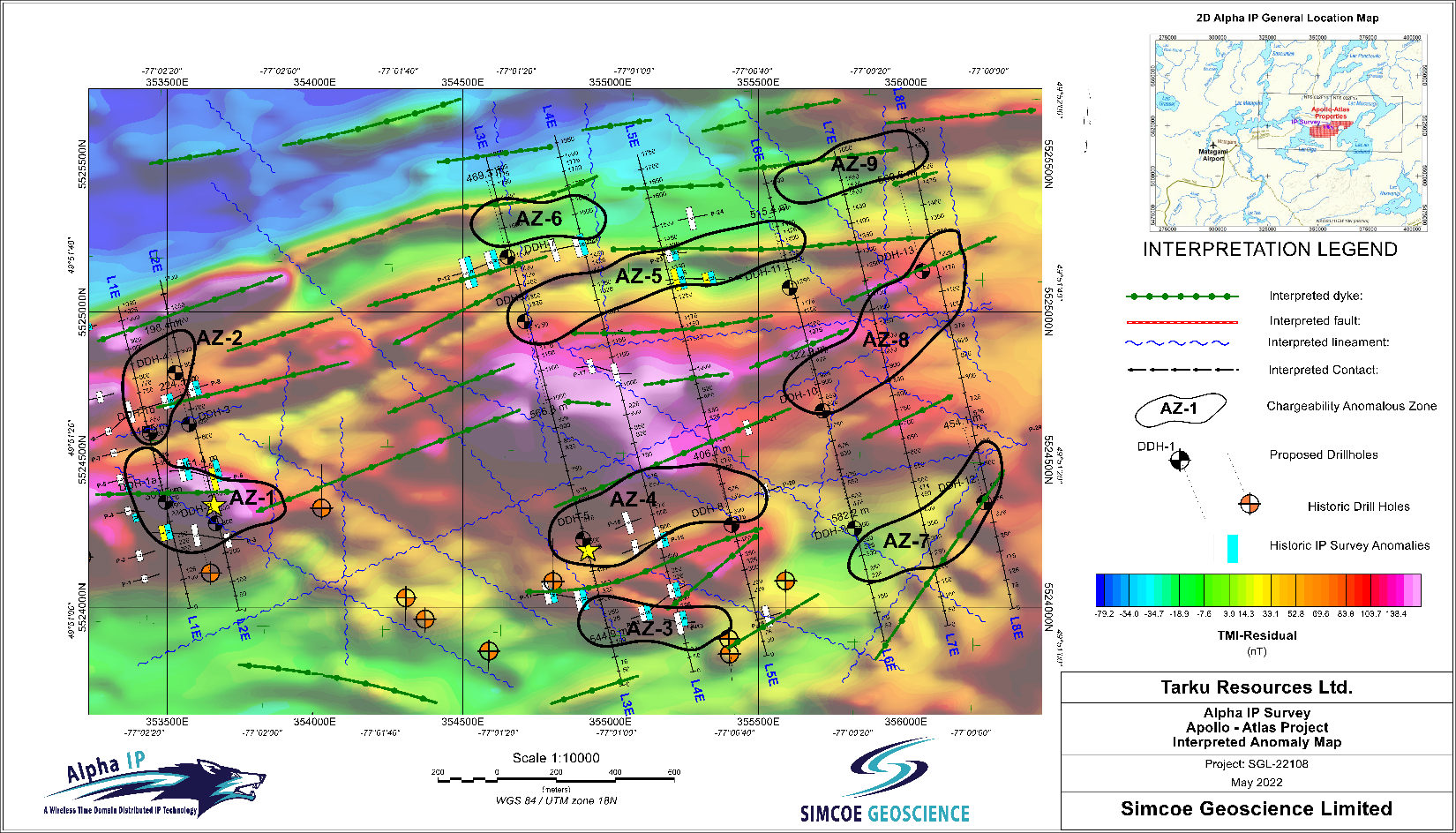 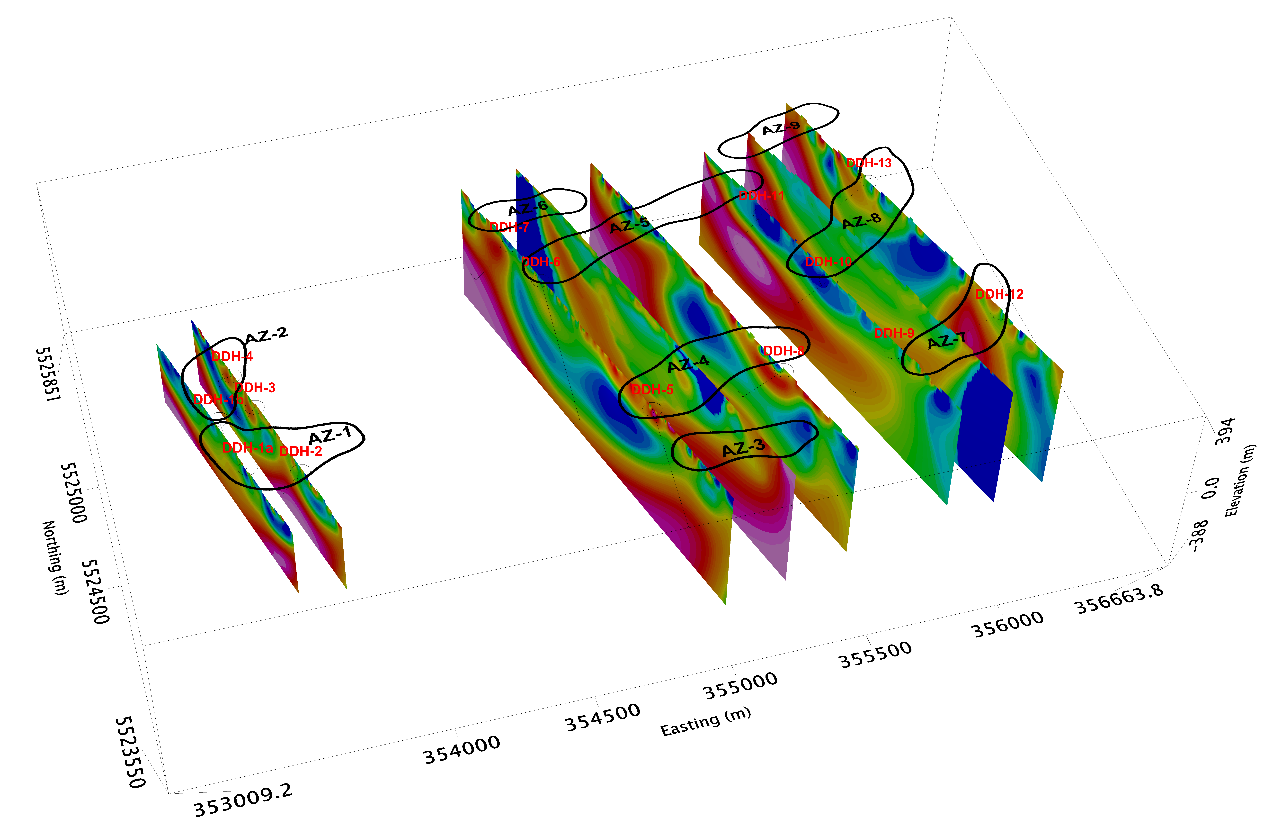 About the 3As project

In Arizona, within the famous Tombstone District, Tarku owns 100% of the 29 km2 Silver Strike Project. Silver Strike has been interpreted by management to have the protentional for similar CRD Deposits comparable to the Hermosa Project, located 80km west in Santa Cruz County, Arizona, which South32 acquired for USD 1.8 billion in 2018. Tarku is currently planning a deep-penetrating and high-resolution geophysical survey over the priority targets, with a minimum of 5,000-meter drill program to follow this year.

In Quebec, Tarku owns 100% of the “Three A’s” exploration projects, (Apollo, Admiral and Atlas Projects), in the Matagami Greenstone Belt, which has been interpreted by management as the eastern extension of the Detour Belt. The Detour Belt has seen recent exploration successes by Midland Exploration Inc., Wallbridge Mining Company Ltd., Probe Metals Inc. Tarku has now commenced a deep-penetration and high-definition IP geophysical survey over priority area on Atlas and Apollo Projects, and a minimum of 3,000-meter drill program is planned to follow this during 2022.